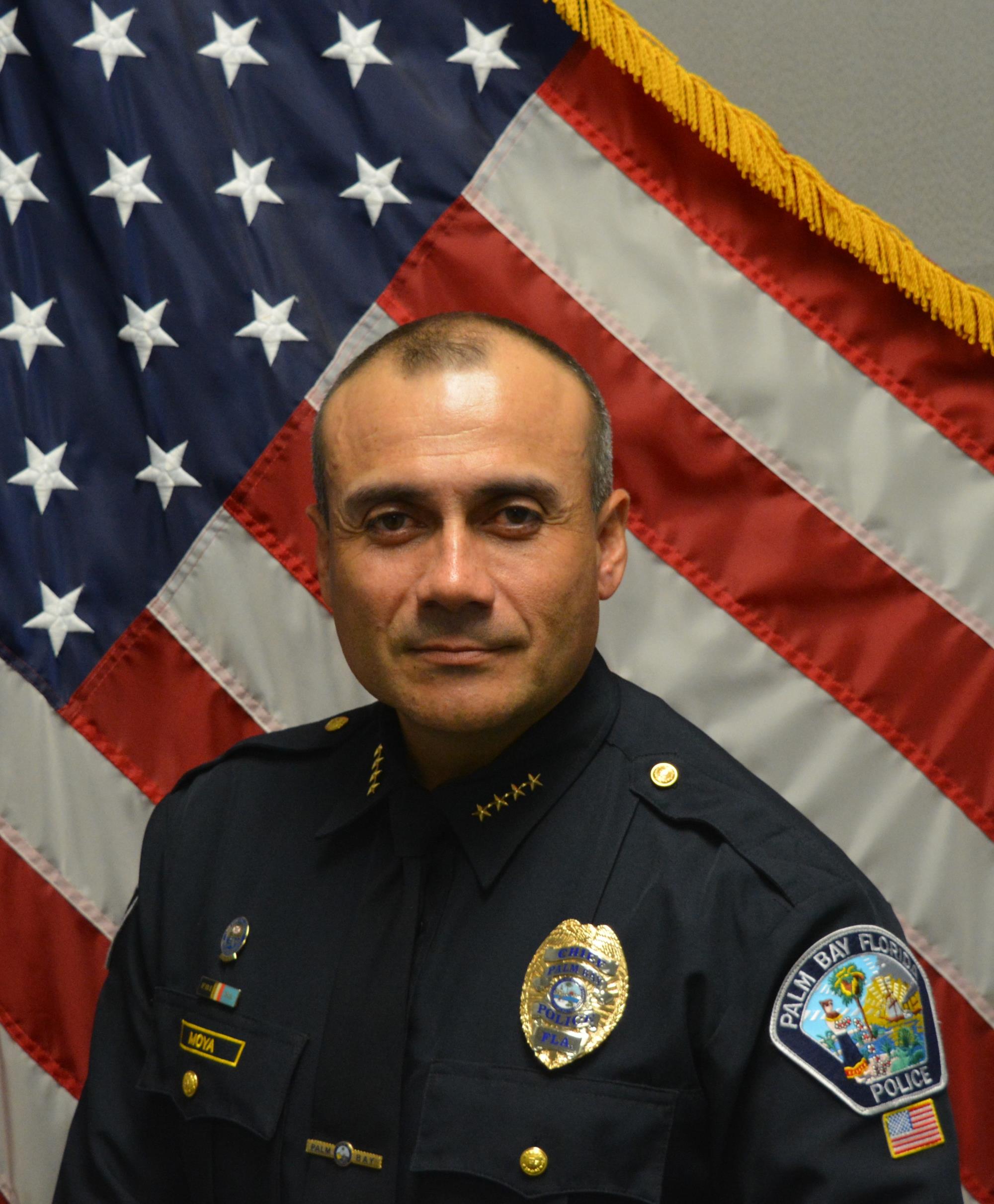 Chief Nelson Moya began his career with the Palm Bay Police Department in 1991 and has served the agency in a variety of disciplines. During his tenure he quickly established himself as a leader and served in multiple leadership functions to include command and leadership roles within the SWAT team, training of new hires in the Field Training Officer program and as a sergeant managing patrol zones, neighborhood policing, and special investigations. Chief Moya has also served as a major case detective, internal affairs investigator, tactical incident commander and lieutenant managing the Major Case Unit, Special Investigations Unit and Support Services.

Chief Moya earned an associate degree from Brevard Community College, a bachelor of science degree in Administration from Barry University, and is a graduate of the Federal Bureau of Investigation National Academy, 263rd Session. He also graduated from the Southern Police Institute Command Officer’s Development Course, 36th Session; the Florida Department of Law Enforcement Leadership Academy (Inaugural Session); the FBI’s Florida Executive Development Seminar and the Certified Public Manager program. Chief Moya is currently serving as the president of the Brevard County Chiefs of Police Association. 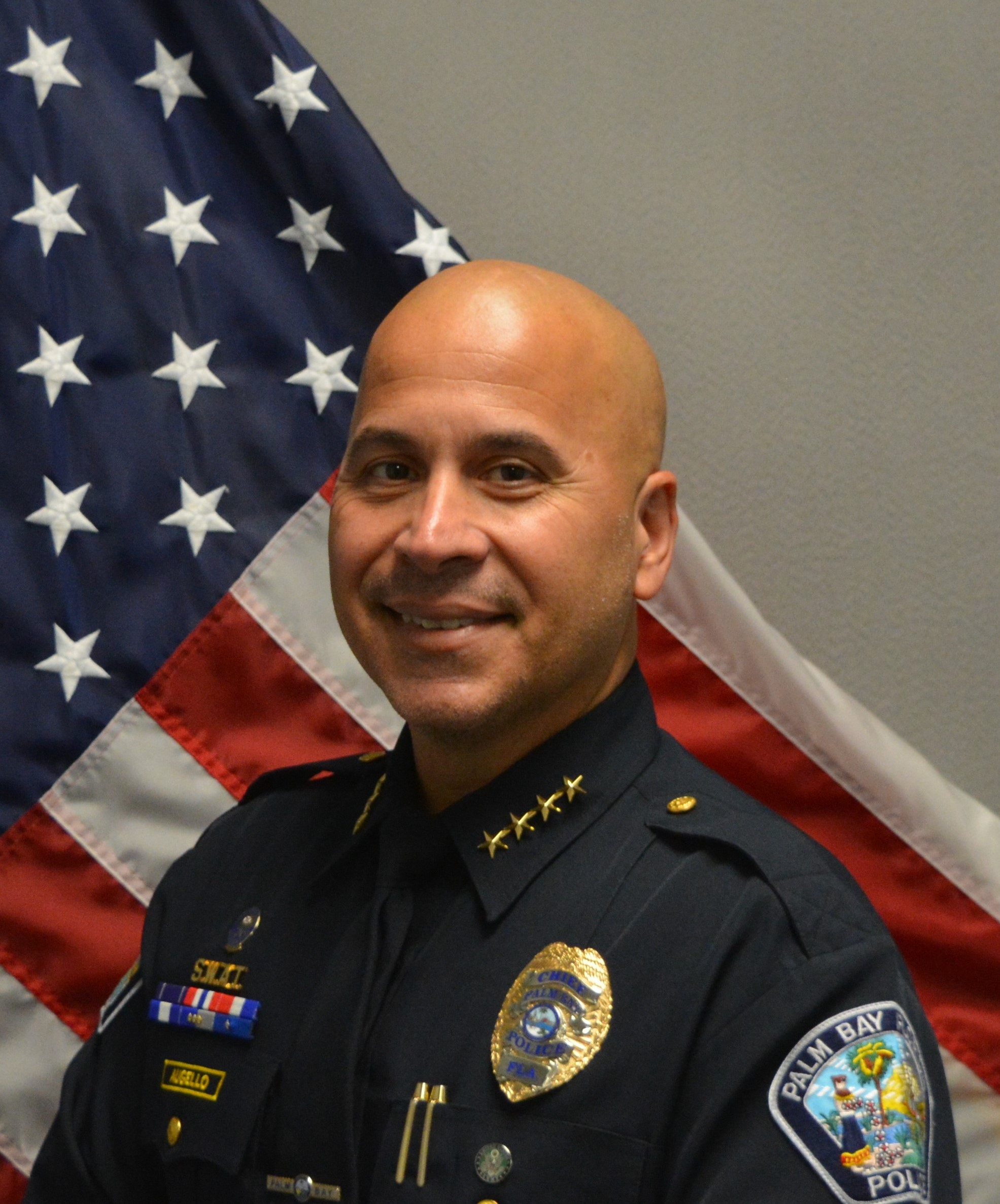 He was the recipient of the City of Palm Bay City Manager’s Award of Excellence in 2016.

Deputy Chief Augello has graduated from the Florida Department of Law Enforcement’s Leadership Academy, Florida State University’s Center for Public Management, and has a bachelor of science degree from Barry University in Administration. 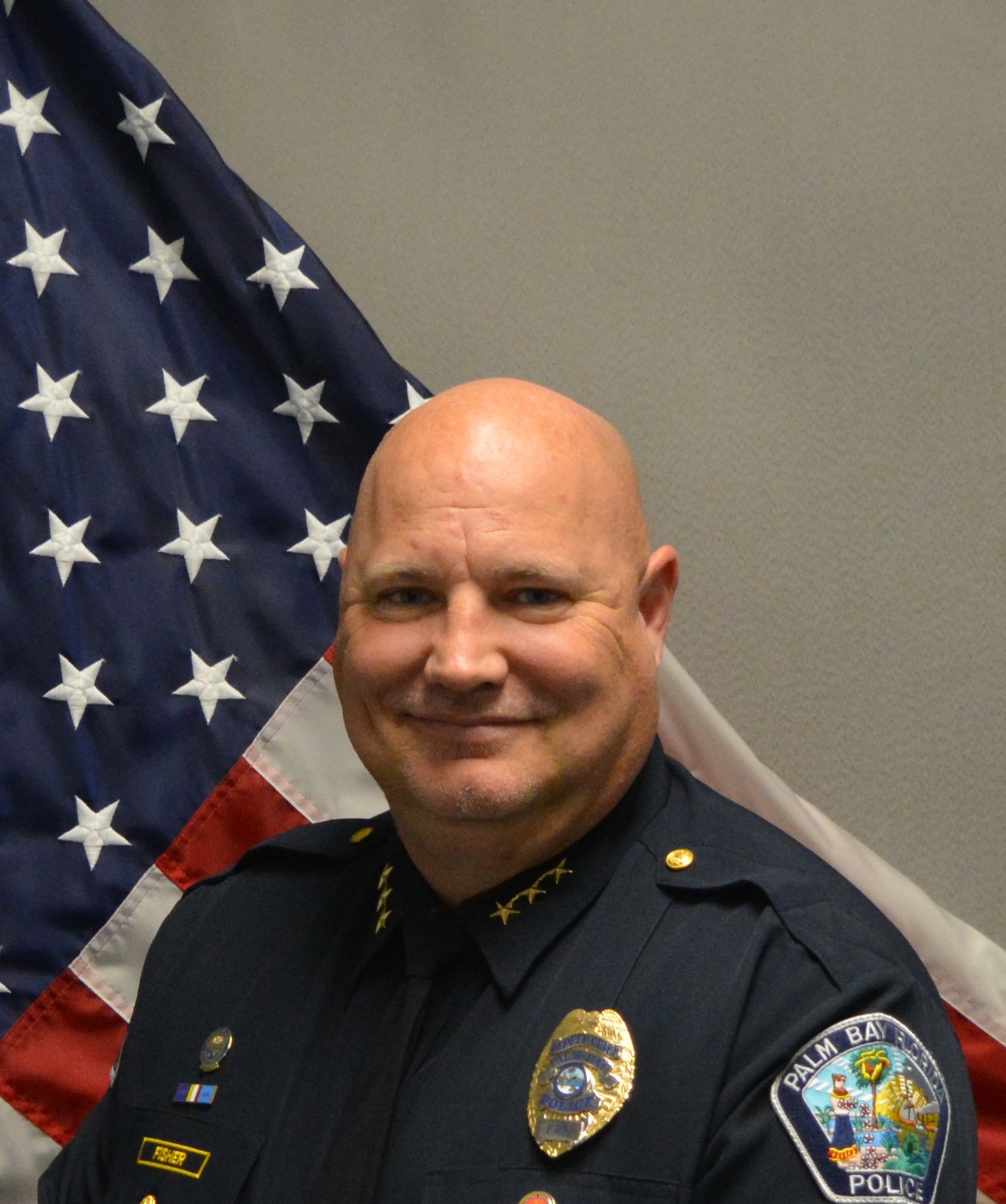 Commander Lance Fisher is a veteran of the U.S. Marine Corps.  He began his career in Law Enforcement in 1999 when he joined the Rocky Mount Police Department in North Carolina. He joined the Palm Bay Police Department in 2004 but had a break in service to go to Afghanistan where he was assigned to a police training facility. Since his return in 2007, he has served in the following positions: Patrol Officer, Field Training Officer, member of the Crime Suppression Unit, Patrol Supervisor, Crime Suppression Supervisor, Special Operations Supervisor, Patrol Watch Commander, and Support Services Lieutenant. Currently, he serves as the Commander for the Uniformed Services Division. Commander Fisher also serves as the Vice President for the Palm Bay Police Explorer Board.

Commander Fisher earned his associate degree in Criminal Justice from Nash County Community College, a bachelor’s degree from North Carolina Wesleyan College and a master’s degree in Public Administration from Florida Institute of Technology. He is a graduate of the Federal Bureau of Investigation National Academy, 279th Session; Senior Management Institute of Police, 77th Session; and a recipient of the FBI-Trilogy Award. 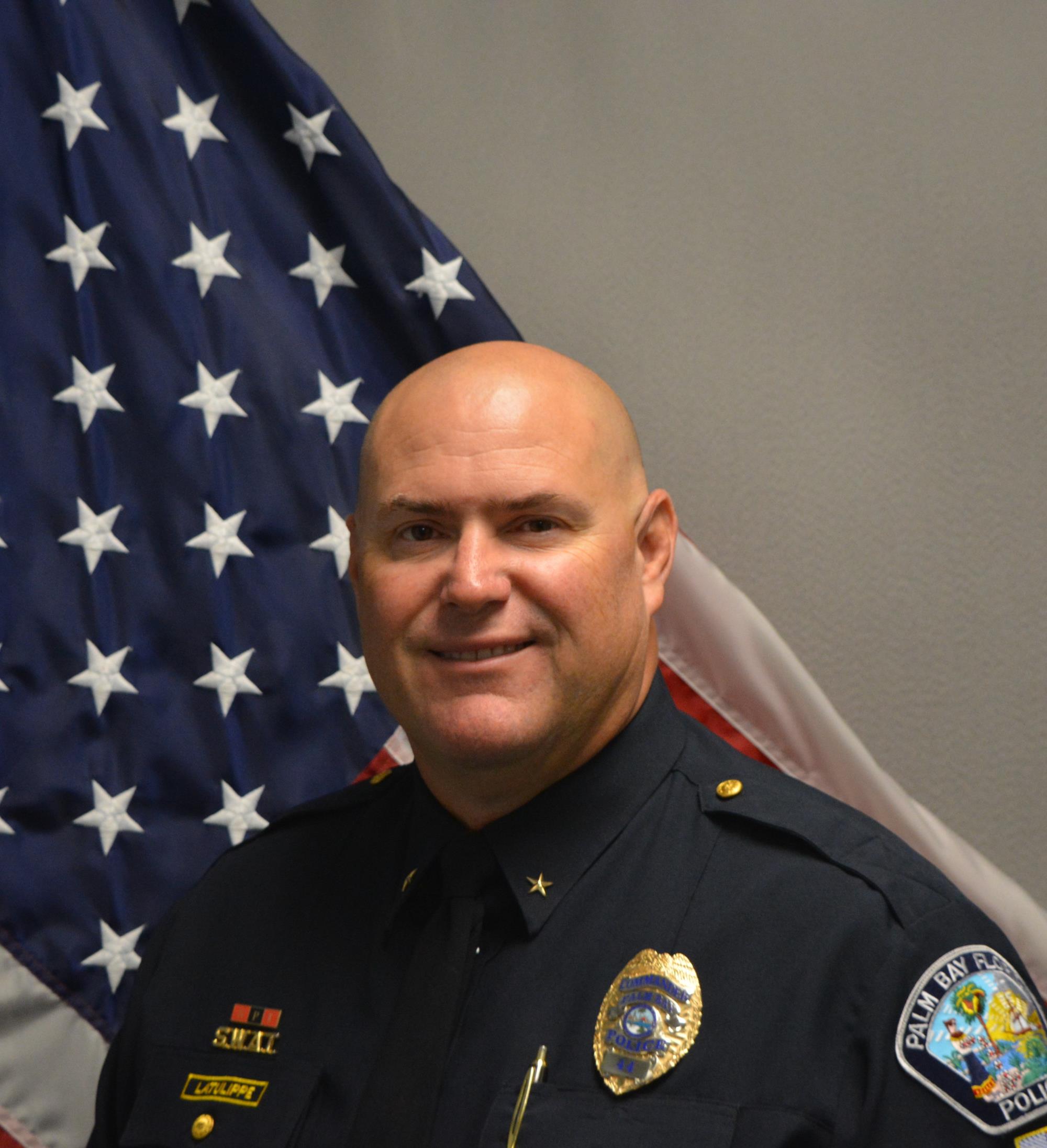 Commander Greg Latulippe is a Palm Bay native who joined the Palm Bay Police Department in January 1997. While serving as an Officer he filled the positions of Patrolman, Field Training Officer, Special Victims Unit Detective, Corporal, and Narcotics Agent. In 2000, he was selected as a SWAT team member; promoted to Sergeant in 2006; promoted in 2010 to Lieutenant; and in 2018 promoted to Commander.

Commander Latulippe is currently assigned to the Support Services Division which includes the Communications, Community Services, Logistics, and Recruitment and Training. 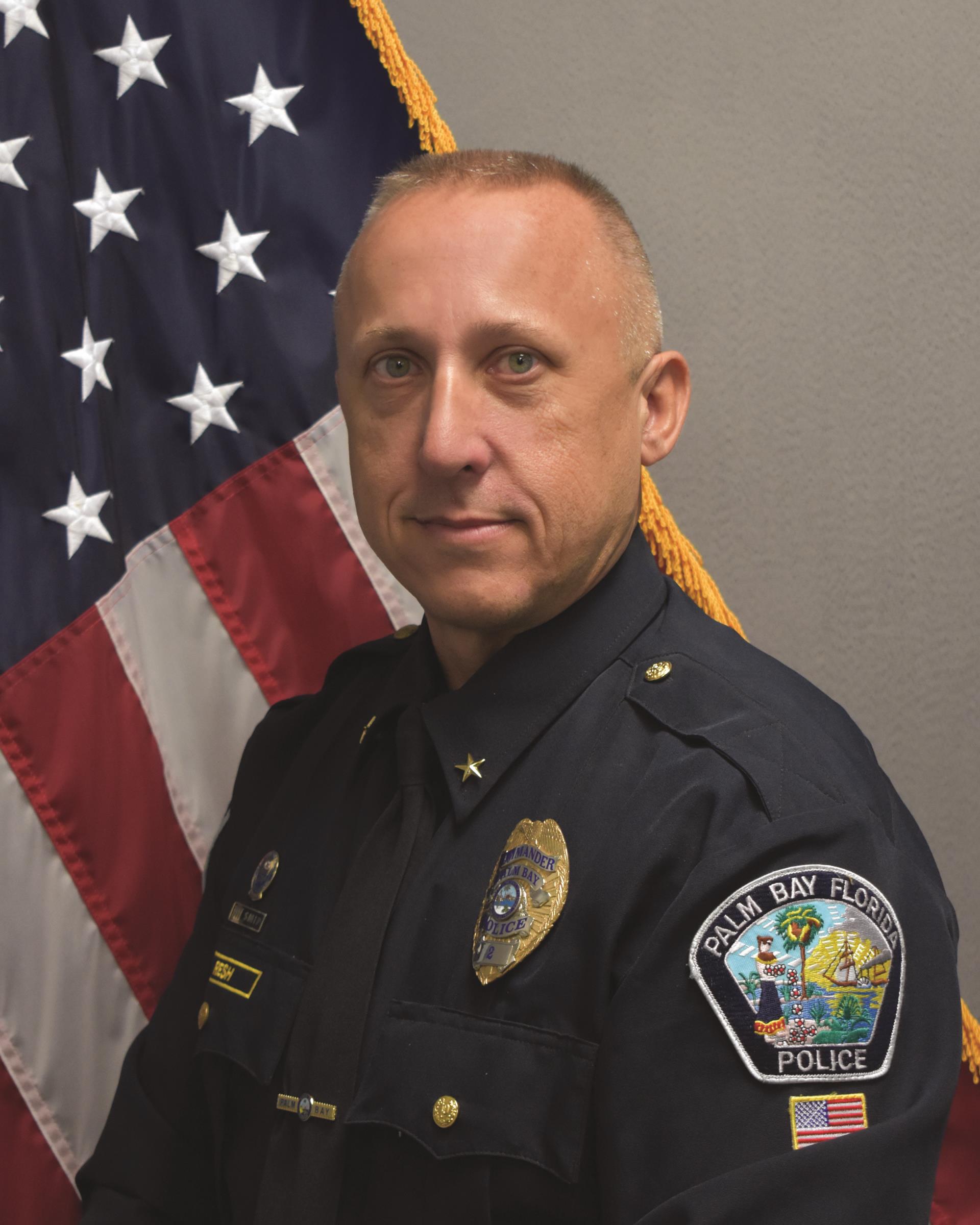 Commander John Resh began his Law Enforcement career in Indiana in 1988 and then joined the Palm Bay Police Department in 1990. During his tenure he has served in many positions to include Patrol, SWAT, Crime Suppression, Neighborhood Policing, Internal Affairs, Support Services, Investigations and Uniform Services.

He is currently assigned to oversee the Uniform Services Division.

John is an FDLE State certified firearms instructor, armorer and medical instructor. Commander Resh has been the longest serving member of the department’s SWAT Team with over 21 years of continuous service as an operator where he served as a team leader, sniper, firearms instructor and as the team’s tactical medic.  Currently he serves as the teams Administrative Commander.

Commander Resh holds an Associate of Science degree in Public Affairs as well as a Bachelor of Science degree in Criminal Justice from Indiana University.  He is a graduate of both the Indiana as well as the Florida law enforcement academy where he received the Outstanding Graduate Award. He is a graduate of the Senior Management Institute for Police, FBI Executive Development Seminar as well as being a Certified Public Manager. 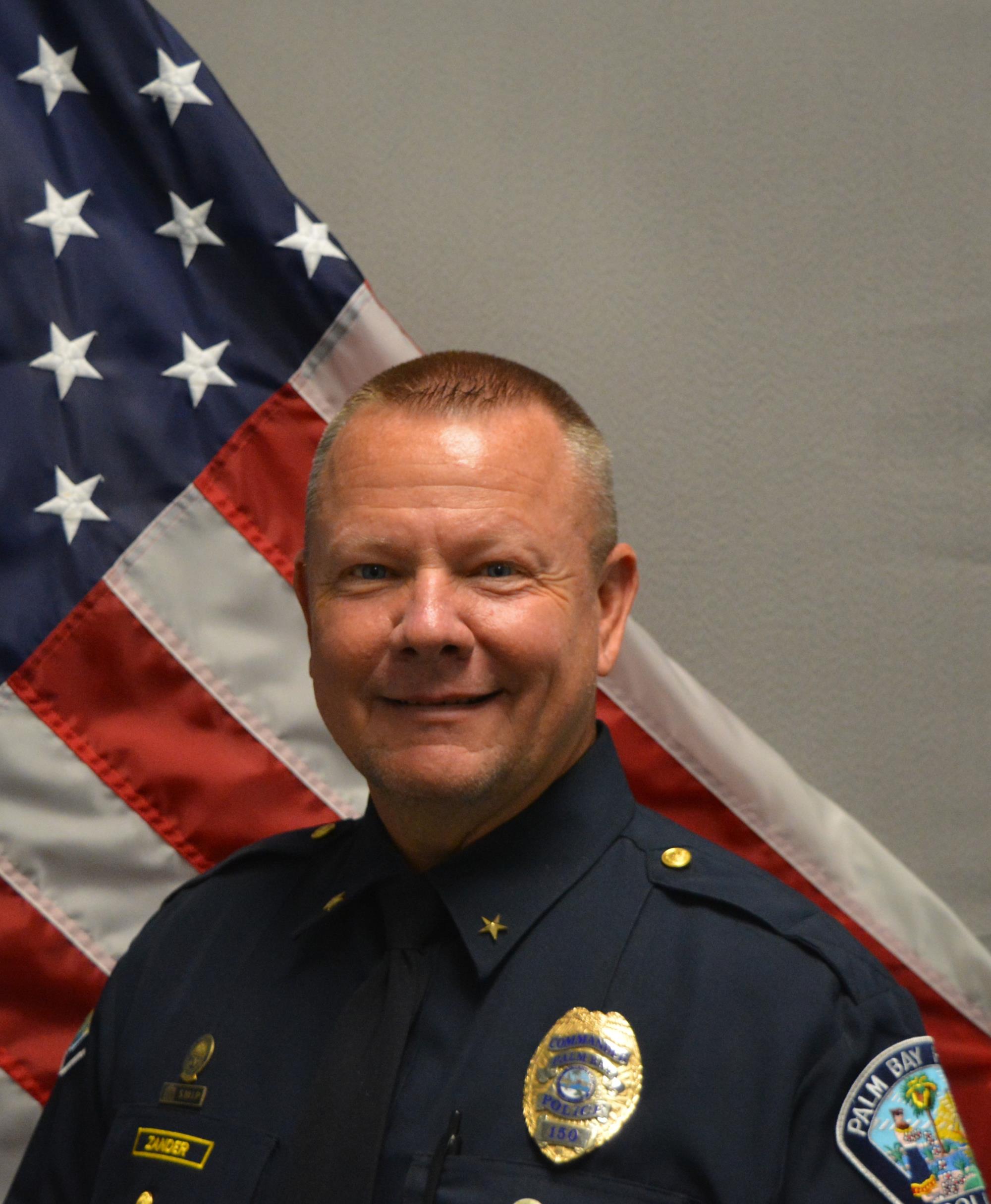 Commander Tim Zander is a veteran of the U.S. Army where he served for four years. He began his professional law enforcement career in 2000 when he joined the Palm Bay Police Department as a patrol officer. During his tenure with this agency he served in a variety of capacities including patrol, field training officer program, and special investigations. Commander Zander was promoted to sergeant in 2007 and served as a patrol supervisor, field training officer coordinator and lead the Special Investigations Unit which handled drug and weapon investigations along with targeted and covert high-risk operations often involving career criminals and violent offenders. Commander Zander quickly worked his way up to the rank of lieutenant in 2011 where he began serving as watch commander. His leadership responsibilities expanded to include coordination of security and public safety for special events. He also managed the reserve officer program.

Commander Zander has an associate degree from Jefferson Community College in Watertown, New York; a bachelor's degree in professional administration along with a master's degree in public administration from Barry University. Commander Zander is a graduate of the Florida Leadership Academy, Florida State University's Certified Public Manager program and the Senior Management Institute for Police. 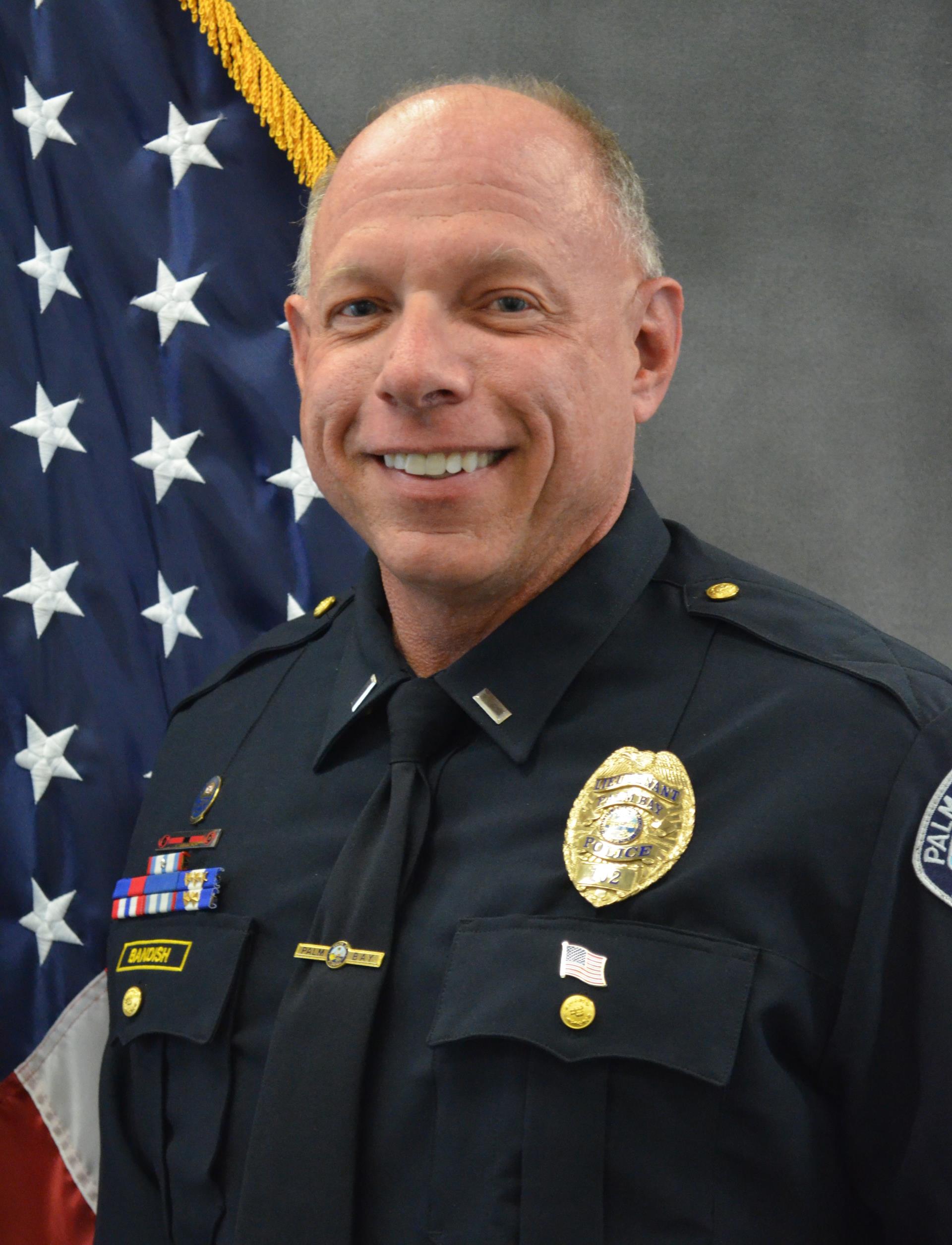 Lieutenant Michael Bandish began his career at the Palm Bay Police Department in 1989.  Currently, he is assigned to the Uniform Services Division as a Watch Commander. 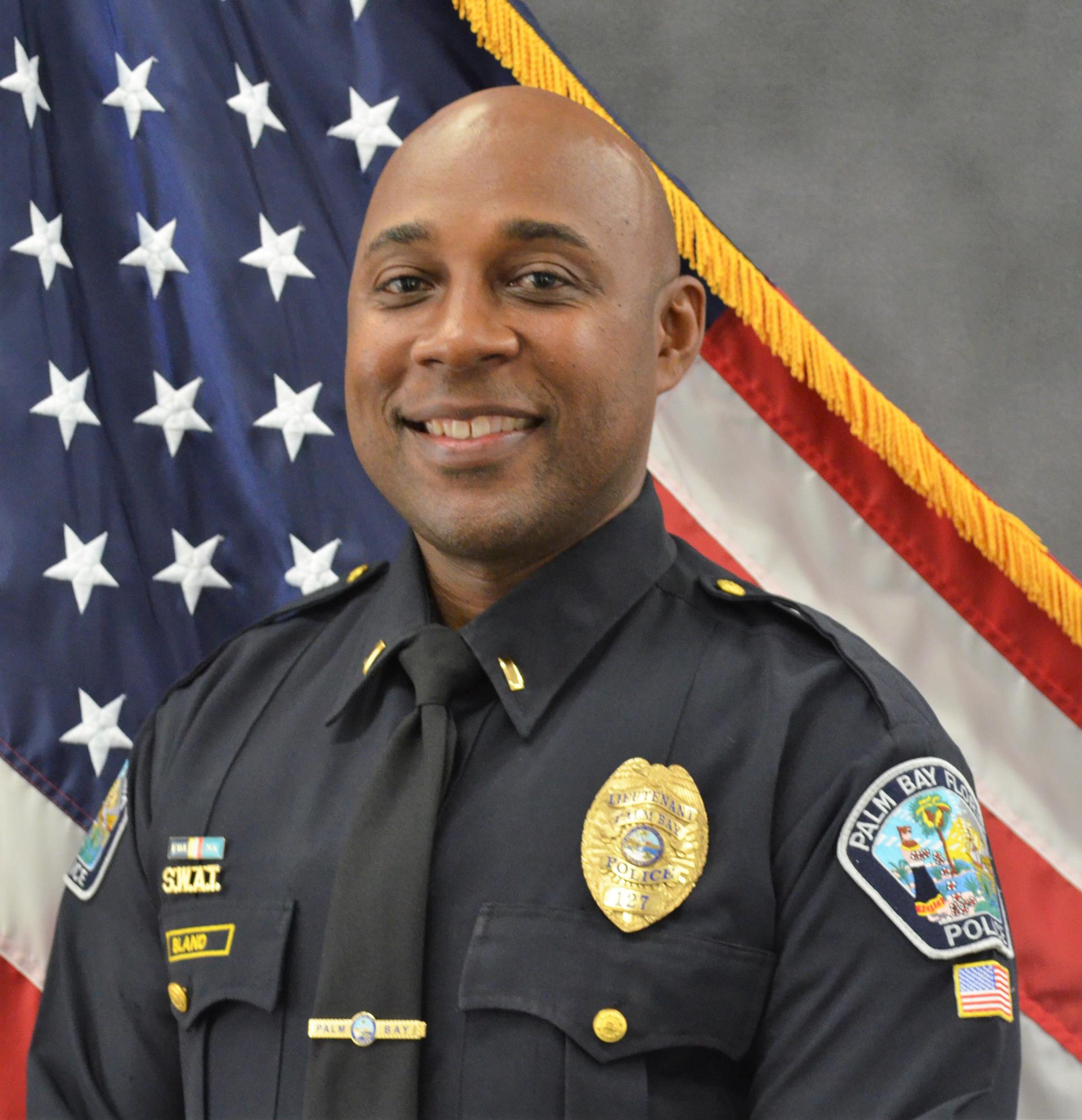 Lieutenant Steve Bland is native to Brevard County. He began his career with the Palm Bay Police Department in 1996.

Currently, he serves as the Support Services Division Lieutenant where he oversees Recruitment and Training.

Lieutenant Bland is a graduate of the FBI National Academy. He graduated from the Certified Public Manager Program at Florida State University, Florida A&M University, and Lively Law Enforcement Academy.

Lieutenant Graves was named the Palm Bay Police Department 2006 Officer of the year and Medal of Valor Recipient. He has further received numerous Meritorious Service, Commendation and Unit Citation Awards. 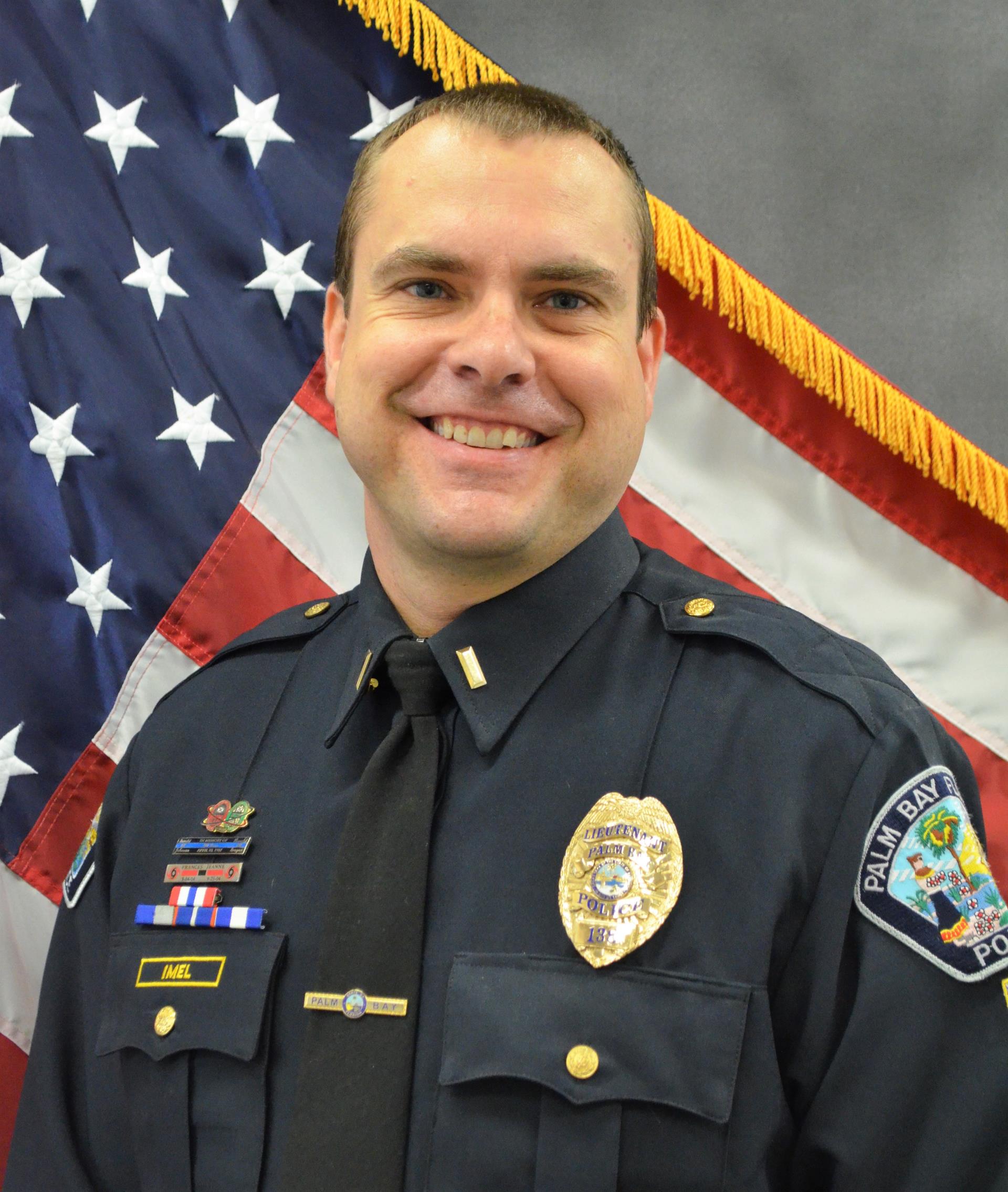 Lieutenant Chris Imel began his career at the Palm Bay Police Department in 1999. He did however work for the department as a police dispatcher in 1995 until he decided to attend the police academy in 1997. He has served as a Patrol Officer, K-9 Officer, Field Training Officer, Honor Guard Member, Dive Team Member, Corporal, Accreditation Officer, General Crimes Detective, Sergeant, Lead Assessor, Accreditation Manager, Emergency Manager, Special Victims Unit, DNA Program Manager, Sexual Offender Manager, and Special Operations Lieutenant. Currently he serves as the Lieutenant for Investigations which includes the Special Victims, Major Case and Crime Scene Units. Lieutenant Imel also serves as the treasurer for the Explorer Board.

Lieutenant Imel has his Bachelor of Science in Administration from Barry University. 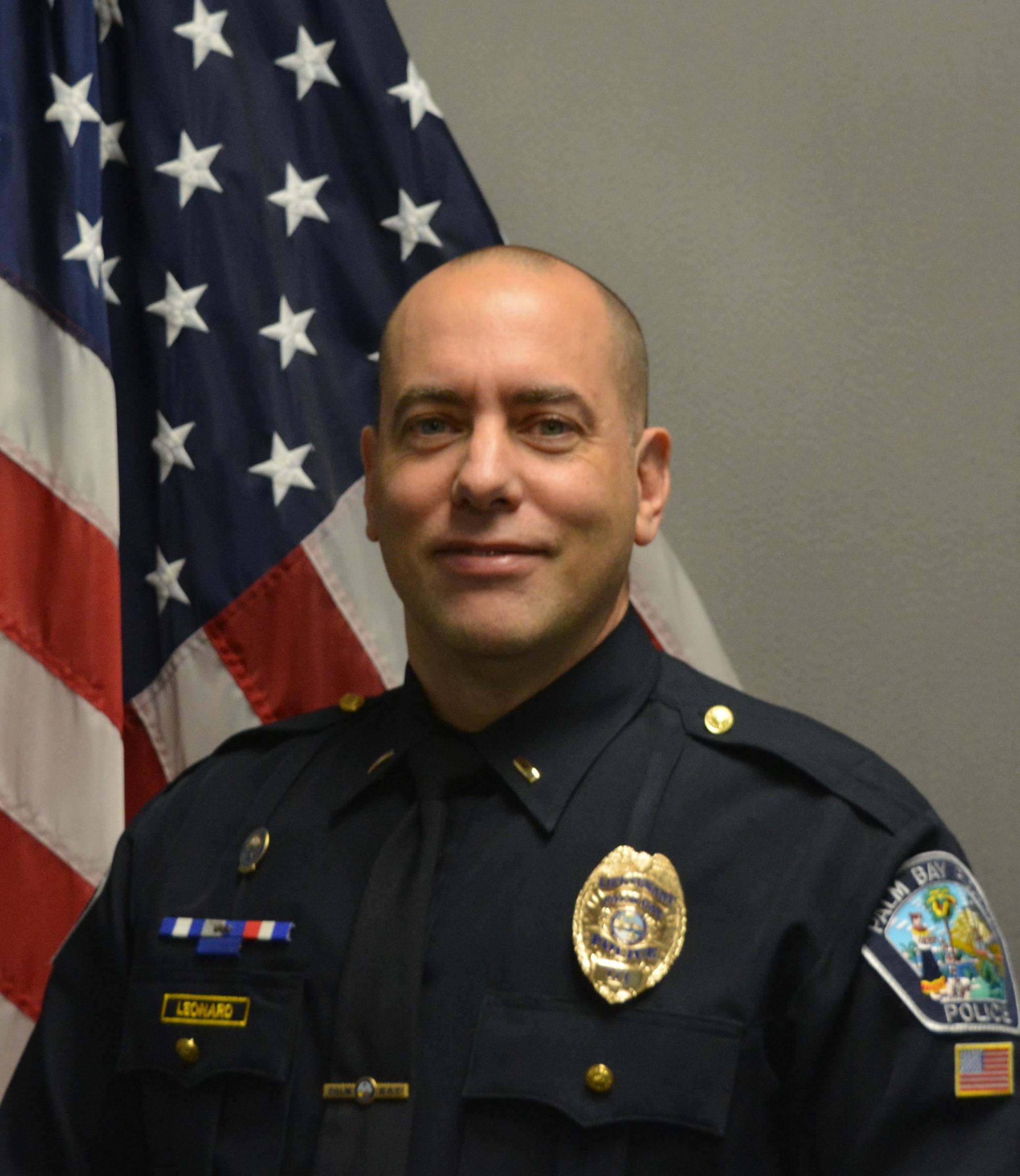 Lt. Greg Leonard has been serving with the Palm Bay Police since 2007. Prior to his employment with Palm Bay he served as a Deputy Sheriff for the Dutchess County Sheriff’s Department in NY.  Lt. Leonard is currently the Watch Commander on nights A division. He is also the Team Commander of the Critical Incident Stress Management Team (CISM), which conducts stress management debriefings with officers who have been involved in high stress critical incidents. The CISM process is designed to mitigate stress related to PTSD. Lt. Leonard is also active in connecting with various community organizations and residents to improve and foster a healthy relationship between the community and the police department. 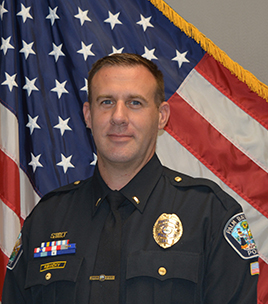 Lieutenant Ribnicky was named the 2016 Palm Bay Police Department Officer of the Year and was a Medal of Valor recipient.

Currently, he is assigned to the Uniformed Services Division as a Watch Commander and is the SWAT Team Commander. 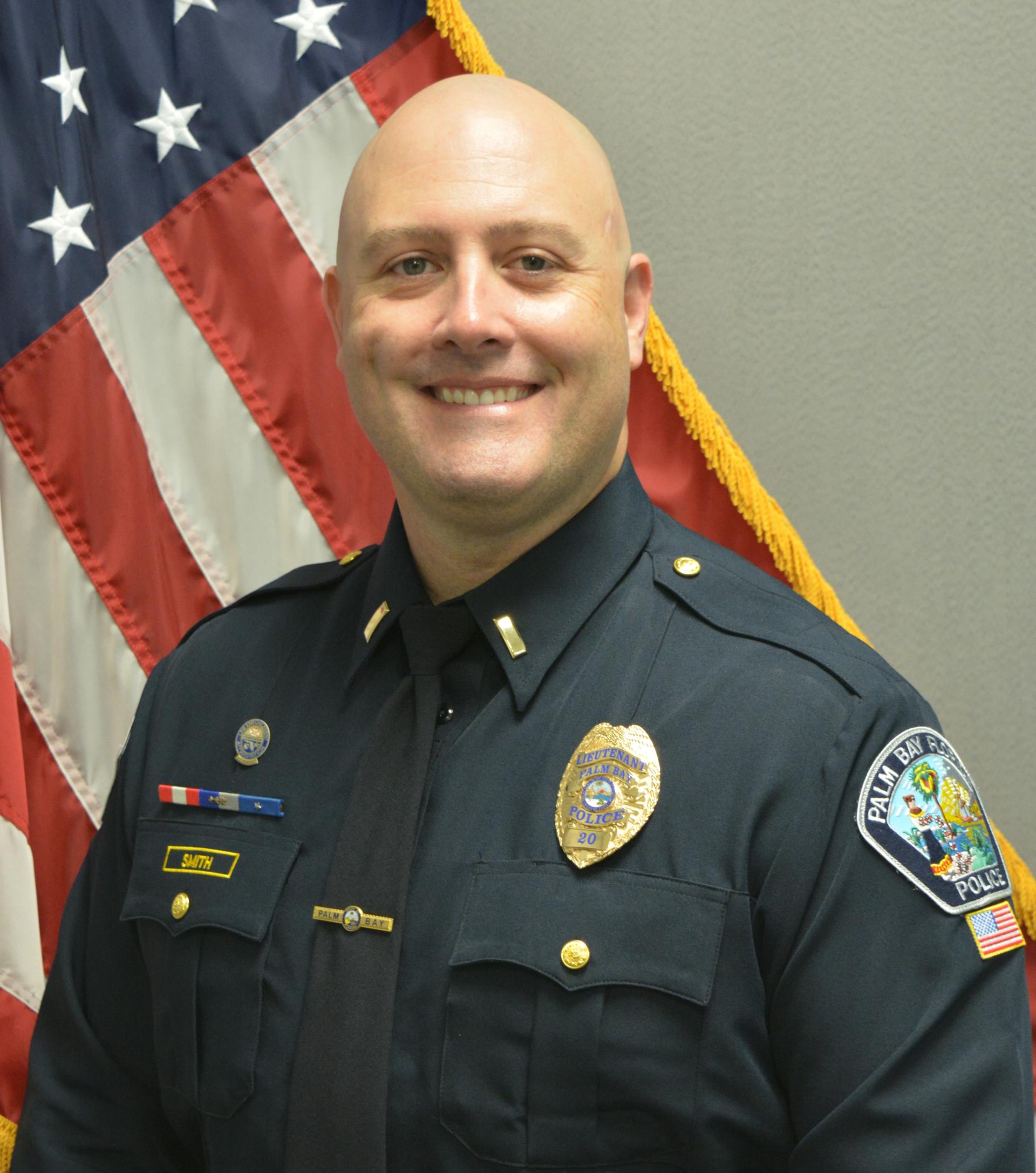 Lieutenant Michael Smith currently serves as the Palm Bay Police Department’s Public Information Officer.  He began his career with the Palm Bay Police Department in 2007 and served as a Patrol Officer and Field Training Officer.  He was promoted to Sergeant in 2013 and served as the agency’s Internal Affairs Sergeant from 2015-2017.  Smith was promoted to Lieutenant in 2017 and served as a Patrol Watch Commander until his current assignment in late 2019.